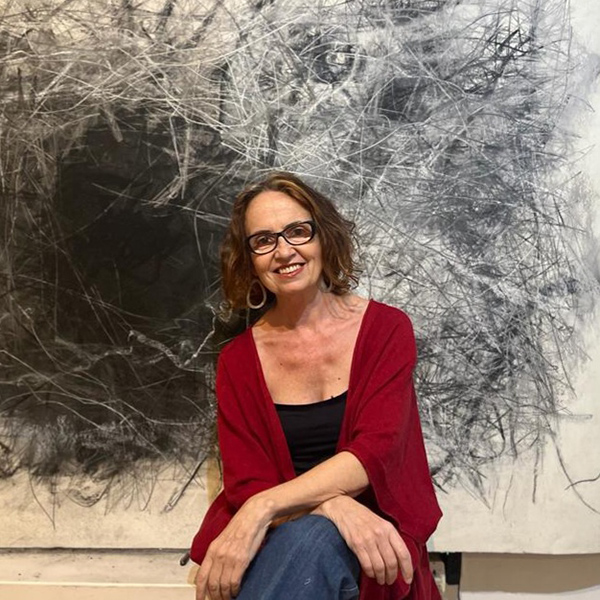 Visual Artist and Graduate in Psychology.

Born in 1960 Suipacha, province of Buenos Aires, Argentina
Education: She has been studying drawing and painting since 1884 with the following artists from Buenos Aires: Miguel Ángel Araldo, Malú Mansilla, Tomás Mugica and Raúl Menvielle.
Her particular interest in the subject led her to study sculpture in 1996 with Omar Estela at the Escuela Superior de Bellas Artes de la Nación Ernesto de la Cárcova.
In 2002 she moved to Germany and took up sculpture studies at the "Kulturforum Alte Post" art school in the city of Neuss, delving into modeling with clay, wood carving, metal work, welding and assembly. She also holds seminars on graphic techniques there.
She studies psychoanalysis with renowned psychoanalysts and specializes in creativity.

Artistic and labor practice
Her artistic practice includes the design and management of cultural projects and curatorial experience since 2008, the year she co-founded and began directing Casa Matienzo. Since 2019 she has been the General Coordinator of El Obrador Centro Creativo. These developments constantly nurture and update her work through fluid exchange with various referents of our culture and art. She has coordinated cultural artistic projects together with public and private organizations that had the support of the Ministry of Culture of the Nation, and of CABA and recently, the Somuncurá Plateau Project obtained the support of the OPG (Organization of the Günün a küna People), The Swiss Pro Helvetia Foundation and the Swiss Embassy in Argentina.

Since 2019 she has been a member of the SACH collective, opening and touring visual artists' studios in the neighborhoods of Chacarita, Villa Ortúzar and Parque Chas, open to the public.
Since April 2020, she has been part of the group of 7 Argentine artists Residencia en Residencias that emerged in quarantine due to Covid 19.

She lives and works in Buenos Aires.